Never in my life I thought I would be reading a Plastic Man comic, but the power of Gail Simone compelled me, enough to draw me into the tale of this so far C-Lister from the DC Comics stable.

This planned 6 issue mini series starts with the wise decision of modernizing the character for newer audiences, wasting no time from the opening pages on the origin story of Plastic Man, instead peppering the information on how Eel O’Brian came to be a stretch throughout the pages, giving the story a nice pace, not showing too much for those who already know the character, and showing just enough to keep entertained those who are new to his world.

The plot is initially guided by Eel’s pursuit of the folks who left him to die, but goes through a mystery woman that needs Eel’s help on unveiling a conspiracy, and ends with the murder of one of his friends, supposedly by the hands of superheroic figures.

The whole issue, especially the opening pages, had me laughing my ass off, the art is gorgeous, and so are the colors. The only reason I’m not giving this a higher score is because I barely know the character and he hasn’t grown enough on me yet, but this can certainly change in future issues.

This is another series where I’m getting into with the story already going and Black Hammer was a tough start. I’ve backtracked to the previous two Age of Doom, and this new series apparently starts where the original left off, with the daughter of the first Black Hammer discovering the truth about the heroes’ situation, only to vanish into thin air.

Lost in an alternate reality, where different versions of people’s stories converge, Lucy Webber, the new Black Hammer, has to find her way back to her friends through understanding the world she was tossed into, that might hold the true for their return to their own reality as well.

The first issue does its best to recap the previous events for new readers, but fact of the matter is that you will barely understand what is going on – and several things are going on! – without having read the first series. There are too many characters and prior events to keep track of.

If you are already into Black Hammer from the beginning, this is certainly a good read, but for someone like me, who is just catching up, it feels like I’m reading a bunch of inside jokes and am left sucking my thumbs as an outsider.

Batman: Prelude to the Wedding: Batgirl vs. Riddler #1

I love the Riddler. I love Batgirl. So joining the two of them was like a party to my fangirl feelings, one that Tim Seeley started and raised the roof just enough to explore the battle of wits between those two characters.

Most of the story is carried by solely by the Riddler’s narration of his clues, which Batgirl follows impeccably, as would be expected of a hero.

But scattered here and there among the clues, we find the Riddler’s musings about Batman’s wedding and his refusal to accept that his bitter enemy was able to find love when he couldn’t, and more importantly, on what love means in the life of a villain and how he is supposed to encounter it.

One more time, the Prelude to the Wedding series excels my expectations and brings us a battle that this time isn’t as much physical as it is mental, and not only goes for the lives of the victims, but also goes for the question that’s been heavily impacting Gotham and all adjacent neighborhoods: how in the heavens is Batman getting married?

Doing jumping jacks of excitement until the next issue, I sign off.

I have a serious pet peeve with narration captions in comics, and Clockwork Inc. is almost entirely carried by them, including direct 4th wall breakings, directly addressing the reader.

Not only that, but the closest thing the story has to a main character is Clockwork Inc, itself, the titular company that takes care of mishaps on the space time continuum and where the protagonists of both parts of the story work on.

In the first part, we have Roger, an average joe that one given day is transported to a parallel world and decides to make a profit out of it. As time passes, he starts to mess up with different timelines and ends up causing so much of a mess that he goes back in time to warn his young self not to do it, only to die in the meantime.

In the second part we are introduced to the special task force that has been assigned solely to correct and keep track of the problems Roger caused during his life. The characters then only have the ability to maintain the status quo that was created, not to alter anything, which doesn’t make it clear what’s the conflict they’ll face in future issues yet.

The art takes some getting used to. At first, it feels like 3D models are being used, but later I wasn’t sure if it was rothoscopy or just very detailed, but rather stiff pencil art – it is gorgeously toned in shades of black and gray and that is a plus.

And about the story, you’re left in the end without being sure of where it is going. There is no sympathetic character to be attached to, there’s no clear conflict and there’s no hook to leave you expecting for the next issue.

The general feel is that this is a slow paced beginning that will unveil in future issues, but the urge to read more was not enticed in me.

Little Girl is delightfully weird. Inspired by Japanese horror movies and the author’s own fear of those, it tells the story of Abby May, the ghost of a little girl going on a murder spree guided by the presence of a stuffed penguin toy [!].

The first issue takes a while to pick up. Things take long to be established and there’s no sense of a main character, though the string of events that unveils are enough to keep our interests peaked. By the end, a pattern is established, wherever the toy penguin goes, so does the little girl, a spirit attached to a material belonging that used to be love and keeps her thettered to this plane of existence.

The second issue picks up just enough of the slack. We’re introduced to a glimpse of Abby’s past, through a dog she seemingly used to know and her less than perfect parents, whom we see through the eyes of a disturbed minister being haunted by her apparition.

The story is great, though like I said, things take a while to start happening and if I didn’t had issue #2 in my hands, this opinion might have been different. The art is simple, but incredibly expressive and the colors give it just the right mood. The letters are my one minor complaint, but things could definitely be worse than that. 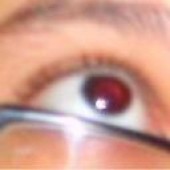