MATA HARI ISSUE 1: I want everyone to see
The life of Margaretha Geertruida Zelle-MacLeod, who performed under the stage name Mata Hari, is the stuff of great fiction. Dancer, courtesan, spy, possible double-agent, mother, martyr, pathological liar or opportunist or just survivor—she was all of these things, depending on your interpretation or whatever history you’re reading. Writer Emma Beeby, illustrator Ariela Kristantina, and colorist Pat Masioni have taken Mata Hari’s story and crafted an intriguing narrative that utilizes comics’ mixture of words and images to great effect.
The story begins in Paris France, October 15, 1917. The opening panel shows her in her cell in the Saint-Lazare Prison for Prostitutes, working on a manuscript about her life. We can see a table on the right side of the panel, but she’s not seated there. She’s at her cot, facing toward the window through which morning sunlight shines between the bars, her back to the reader. The caption from her manuscript enhances the point made by the artwork: “I am a woman who has enjoyed herself a great deal. For that I make no apology.”

She might not be making any apologies, but she is paying a serious price.
After this establishing panel, the rest of the page is taken up with her dressing for what we later learn is her execution. A nun helps her into her corset and with fixing her hair. In the manuscript she writes, “I harbor no hate for those I am to face today. Only pity.”
This opening page goes a long way to establishing the contradictory elements of Margaretha/Mata Hari’s personality. She is a figure of power in an era in which circumstances have contrived to neuter that power, yet she defiantly refuses to give in—or, at least, to allow others to see that she’s giving in—even when preparing for her execution. In her brief essay that closes the issue, Beeby states, “Mata Hari is provocative in every way. She’s not always likable. In fact, she’s often infuriating. She lied continuously. She appropriated cultures that were not her own for money and fame. She was also charming, naive, seductive, smart and bold; able to reinvent herself in ways that no one else would dare try.” Pages 8 and 9 are taken up by a two-page spread that intercuts images of Mata Hari dancing on stage as a powerful “Javanese Princess” with her trial for espionage. In the first trial panel she defiantly denies the name “Margaretha Geertruida Zelle-MacLeod,” but by the last panel of the ninth page she’s pleading with her attorney, “I am innocent. You must prove it… I can’t bare their hatred.”

So, who IS she, exactly?
The issue is structured so that the narrative jumps around, giving brief sketches of scenes from various points in her life. Beeby, Kristantina, and Masioni do something clever beginning on the second page, jumping backward in time, first to Rome in 1913, where Mata Hari is posing as Salome. The artist painting her asks if she wants to see his work and she replies, “I want everyone to see.”
Then we go back two more years to Milan, where she is portraying Venus on stage. In the next panel she’s portraying Cleopatra in Monte Carlo one year earlier. These images firmly place her within the pantheon of real and fictional female power figures. But later in the story, during her trial, the prosecutor references these moments as if they somehow implicate her: “She imagines that she is a queen of old, dragging a throng of adorers behind her chariot on the road to success.” It’s not just espionage that she’s being prosecuted for, but ambition.
The last flashback of this opening section shows Mata Hari in Vienna in 1907. In the last panel we see her having sex (she’s on top), and the reader is brought back into the present with a caption from her manuscript which reads, “In these pages I place my hope that I will be seen as I truly am.” Significantly, the last four words are crossed out. The fate of the manuscript implies that she’ll have to rely on others—including artists—if she really does “want everyone to see.” To return to Beeby’s essay: “I’ll not pretend this is an entirely accurate account of her life. I’ve made assumptions, simplifications, and added a healthy dose of pure fiction.” She also states that previous attempts at presenting Mata Hari’s story “[expose] our biases and those of Western culture that, a full century on, we still carry around.”

The issue ends by intercutting scenes of powerlessness (Margaretha as a child/Margaretha being arrested) and power (Mata Hari the “Javanese Princess” dancing)—mirroring the structure of the beginning of the issue. It’s a clever device that again underscores the dichotomy of Margaretha/Mata Hari’s life.
This is obviously an ambitious passion project for the writer, and the care that went into its creation shows. A lot of thought went into each panel; for instance, on page 14 there’s a panel from the flashback to Margaretha’s sixth birthday, when she’s given a goat cart. Her father tells her that she can decide for herself where she wants to go. But her mother tells her that, in fact, her options are limited. “She can ride it to the end of the street and back again,” she says. While this is going on, a photographer is preparing to take  her photo for the newspaper. It would seem that Margaretha, as Mata Hari, didn’t heed her mother’s warning.

Artist Ariela Kristantina has a simple, uncluttered style that conveys the story deftly. She does an especially good job with backgrounds, giving the reader the sense that the characters are on a full set, without too much distracting busy-ness. Her style mingles modern and classic, and is a bit reminiscent of Rick Geary and Howard Chaykin. She’s also good with camera positioning—on page 17 for instance, as the police are entering her quarters, Margaretha is placed firmly in the foreground, casually drinking tea. She has no reason to believe she’s not fully in control. But then in the next panel the camera is placed overhead, so that the police are above her in the frame. When she’s told that she’s “to submit to immediate questioning,” her response of “And am I permitted to dress first and pin my hair?” feels almost poignant. She might not realize it yet, but whatever power she might have felt she had before is gone.
That said, there are a few awkward moments with the art. Mata Hari’s left arm on the cover is a bit wonky. There are a couple of panels that have a traced look. But these are notable primarily because they’re so rare. Colorist Pat Masioni’s lighting and textures help give the impression of depth within the panels, and compliment the line work. Overall they produce a pleasing, even lush, effect that help build the world and advance the narrative.
MATA HARI #1 is almost as compelling as its subject. If this is any indication of the quality of the next four issues then the entire series will be well worth your time.
Overall: 8/10
On sale February 21st, 2018. 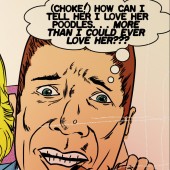