Judge Dredd: Under Siege #1 is a bland take on an over-the-top character. In a plot practically ripped from the recent film starring Karl Urban, the eponymous Judge finds himself trapped in one of Mega City One’s blocks, a skyscraper that basically acts as its own city in miniature.

Unfortunately, this comic fails to offer anything new that hasn’t already been done before in comics and other media. The beauty of the insane world that Judge Dredd inhabits is in the fact that there’s always another aspect of Mega City One and satirically show how crazy it is and how the Judges are the only semblance of sanity left. In earlier progs, we’ve been introduced to factories that recycle human remains and oxygen utility companies on the moon. But in this initial issue, very little is offered for the reader to find interesting. If you’re going to do a basic plotline like this one, a unique spin on it is critical. All that Under Siege offers is a building named after Patrick Swayze where everyone sends their feces. I’m guessing Author Mark Russell is not a fan.

As a fan of Dredd, however, I found myself not particularly fond of Russell’s depiction of the titular character. Dredd has the reputation for being ruthless, supposedly judge, jury, and executioner. And while this description is not inaccurate per se, it seems that some people automatically assume that Judge Dredd is the embodiment of ultra-violence, that he’d shoot first and ask questions later. Anyone who’s read early Judge Dredd comics in 2000 A.D. will know that there’s a little more nuance, albeit satirical, to his characterization. Dredd is ruthless, but only in the fact that he ruthlessly upholds the draconian laws that keep Mega City One’s overpopulated civilization alive. In the dystopian world where Dredd lives, these ridiculous laws are seen as a necessary evil. And while Dredd certainly has killed many, many criminals for resisting arrest and when it would serve the greater good, he is, above all things, a police officer. As a police officer, his primary goal is to apprehend and incarcerate criminals, not murder them. This nuance to his character is a narrow, yet important one to make as it prevents him from being depicted as a vigilante like the Punisher. Dredd is a hyperbolic reaction to an over-the-top world populated by ridiculous people.

The opening shots of Under Siege, however, seem to depict Dredd as having the aforementioned ultraviolent nature, a misunderstanding of the character that has persisted in the cultural consciousness of people who have heard of Judge Dredd, but have never actually read his comics. As a minor gripe, there are some especially “woke” civilians who see no need to fully cooperate and obey the police, even though they are the undisputed masters of the city in the Judge Dredd storyline.

The art by Max Dunbar is good enough, but it’s no Brian Bolland. Since no one is Brian Bolland except Brian Bolland, I suppose it’s something we can all forgive. The boring story, on the other hand, is a little harder to let go. Apart from a few clever moments, this book simple does not have much to offer. The team has quite a lot to do in the next issue to make it a worthwhile pickup.

Pros-Art is good, some clever moments.

Cons-Story has been done before, making this standalone series feel redundant. Necessary characterization is missing in some places. Irritating, “woke” civilians. 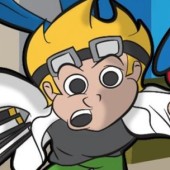 Xerxes: Fall of the House of Darius and the Rise of Alexander #1 Review